Consider this: the subject that Jesus discussed the most when he was walking the Earth was the coming of the Kingdom of God. Humanity’s relationship with money and wealth was the next largest topic he covered. None of the other things he talked about came even close to the amount of time and effort he put into teaching about these two things.

It is easy for us to understand why the Kingdom of God was important to him. But why was greed and wealth such an urgent topic for him to teach about? Perhaps it has to do with how greed often arrives on the end of something really good. We have needs and we have wants. Naturally, we do not want to be in a state where we are without, so we accumulate whatever it is we need, and often we see it as a blessing from God.

Unfortunately, it is easy for us to be preoccupied with accumulating these things (especially if we think of them as an abundance or God overly blessing us), and without knowing it, we slip into greed. The Bible has quite a bit to say about greed.

Most definitions of greed focus on the same thing. It is an intense, selfish desire for something that is beyond what an individual or group needs to exist or function. Greed has to do with accumulation without consideration that others may have a need for that particular resource.

The ancient Greek often refers to the word “pleonexa” or one of its relatives and they are usually translated as “covetousness” in English. Ancient Hebrew is a little more difficult here. A word with a similar definition exists (chamad), but the idea is usually conveyed with other analogical ideas such as “man with an evil eye” or “arrogant man.” In any usage, it is not a good characteristic for a human to be described as.

Greed, is in fact, a sin. If you read 1 Timothy 6:9-10, it describes a greedy person as one who is falling into sinfulness and it is a trap for their soul. Colossians 3:5 and Ephesians 5:5 both equate greed with idolatry. This is a serious idea that we must allow to scare us. When we gather things to ourselves that we don’t necessarily need, but others do, we are placing those things in the place of the sovereign God in our lives. These things have become our lord, and our desire becomes for them, not for the one that created us.

It may even seem an innocent thing to us, but I find that many people do not ask serious questions of their faith lives when there is an idolatrous situation in front of them. Consider how some people act when either their college football team has won or lost a game against a rival team. Do they get as excited about their salvation or the things of God? What about if a political situation has occurred and that is all they can talk about? What if the stock market has blessed them with extra money or they have lost some, how do they act?

If this is you, then I would invite you to some serious reflection about who your God really is. God is ultimately the one in whom we place our hope, find our security of salvation, and have expectations of for our provision. When we apply those same ideas to other things, it becomes idolatry.

Is Greed a “Deadly Sin?”

The ancient church (Orthodox/Roman Catholic) was very aware of the way that sin seems to transform into different ideas from time to time. If a new thing arises, we need to be able to identify whether it is a sin or not. If we simply say that we cannot speak about something because it is not in the Bible, then we fall into a very legalistic practice of faith, much like the Pharisees and Sadducees of Jesus’ day.

Using a categorization of sin like this allows us to be obedient to the spirit of God’s law as well as the letter of it, not to mention preventing more harm and degradation to our souls.

Where Does the Bible Address Greed?

There are other verses, but these are very clear about the idea:

Ecclesiastes 5: 10: "He who loves money will not be satisfied with money, nor he who loves wealth with his income; this also is vanity.”

Psalm 10:3: "For the wicked boasts of the desires of his soul, and the one greedy for gain curses and renounces the Lord.”

Proverbs 23:4: "Do not toil to acquire wealth; be discerning enough to desist.”

Mark 8:36: "For what does it profit a man to gain the whole world and forfeit his soul?” 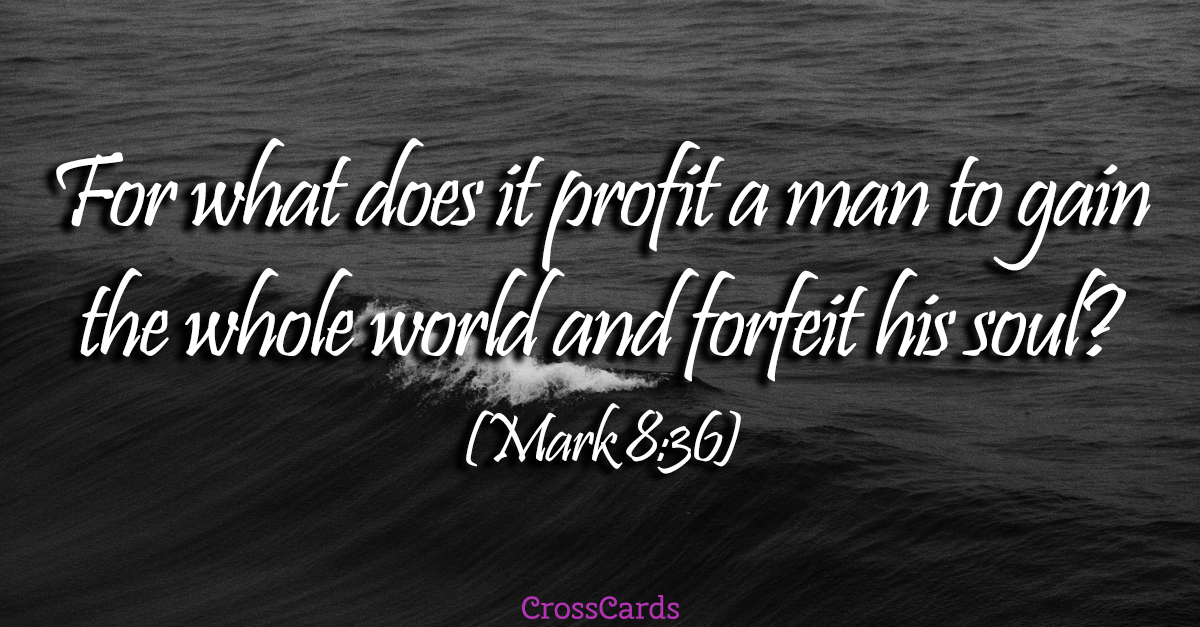 Luke 12:15: "And he said to them, 'Take care, and be on your guard against all covetousness, for one's life does not consist in the abundance of his possessions.'”

Ephesians 5:3: "But sexual immorality and all impurity or covetousness must not even be named among you, as is proper among saints.”

Hebrews 13:5: "Keep your life free from love of money, and be content with what you have, for he has said, 'I will never leave you nor forsake you.'”

What Does the Bible Say about Wealth?

While Jesus did not have lots of good things to say about people that were wealthy, we must consider that he was addressing a society where it was very rare for a wealthy person to look out for the needs of the poor. Luke 4:16-21 is a peek into the beginning of Jesus’ ministry, and he directly quotes from Isaiah that he has come to bring “good news to the poor.” It does make sense that he would address those that probably created and sustained the financial system that dehumanized the poor. They lived in a world where those that were wealthy were considered to be the most blessed by God.

This is much like the prosperity gospel teachings that we see in the Christian faith today and there is danger for our souls in thinking like this. Nowhere in the teachings of Jesus are we promised wealth and comfort. Even when we move from this life into the next, there is no promise of wealth. There is a promise of paradise that is tied to being in the presence of the Almighty. While in this life, we are promised that we will be despised by the world and that there will be times when Christians will have to flee and/or die for the Gospel. Does this sound like we should be so focused on wealth?

But, do not despair. Jesus did not condemn the wealthy to perdition out-of-hand. John 3:16 is a very inclusive statement in that “whosoever” believes in Jesus will be saved. The only condition there is in the believing. Matthew 19:16-30 is a very popular story because it contains a very absurd phrase. In verse 24, Jesus says it is easier for a “camel to go through the eye of a needle than for a rich person to get into heaven.” The disciples respond by saying that it would be impossible for anyone to get into heaven then. This reflects their holding the popular idea that rich people were more blessed and in God’s favor. Jesus is addressing that assumption, but he also is telling them that it is not impossible for wealthy people to get into heaven. We all depend upon the grace of God for the salvation of our souls.

What Does it Mean to Be Storing Up Treasures in Heaven?

Currently, I serve as a pastor of a congregation in an area where there are extremely wealthy people and extremely impoverished people. The differences are staggering considering that these folks often live only a few hundred feet from each other. Both types of folks attend our church. There is a man in our church who started life very, very poor and through the blessings of God, ended up retiring as a bank president. His view is that God has blessed him so that he can be a blessing to those that are less fortunate and in my opinion, he is doing what God has called him to do. He understands that the wealth is not God. Wealth is a means for other things that are far more important, such as elevating people to be able to support themselves.

This man does not want any recognition for what he is doing. In my opinion, he understands Kingdom Finance better than anyone I have ever met. When this man arrives in God’s throne room, he will be well received. Not because of the money he has made in his life, but because of the people that he helped with that money. That money is God’s investment and he is building interest and returns for God’s kingdom. Please read Matthew 25:14-30 for further reference.

Is It Wrong to Ask God for Money or Financial Assistance?

It is not a bad thing to ever recognize our total dependence upon God. If we have a need, we should ask God. There are some Scriptures to consider first. In Matthew 6:25-34, Jesus is preaching the Sermon on the Mount. Here he reflects that the creatures of nature are cared for by God and we are treasured more than they are. God will bless us with what we need. Jesus’ concern in this passage is the amount of anxiety that we give to ourselves over the lack of things. For him it indicates that maybe we don’t trust God as much as we think we do.

James 4:1-3 says that we don’t ask and don’t receive, and when we do ask, we don’t receive because we are asking out of our own desires (greed) and not out of our harmony with the leading of God. So, it is okay to ask for money or financial assistance from God, we just have to be sure that we are doing so because God is leading us to use it for something that will build the Kingdom – not because we think that riding around in the finest car or living in the finest house shows something about God to the rest of the world. That returns us right back to that very thing that Jesus despised in the culture of wealth in his day.

The Bible does have quite a bit to say about greed. For us, we must be very careful or we could easily slip into this sin. Look to what Jesus taught about greed and wealth, and there you will find what you need to understand the right way to approach wealth without making it an idol that comes between you and God.

Larry White is the pastor of Ephesus Baptist Church near Sanford, NC

This content first appeared on BibleStudyTools.com and is used here with permission. To view the original visit: https://www.biblestudytools.com/bible-study/topical-studies/is-the-bible-anti-wealth.html