“But when all goes well with you, remember me and show me kindness; mention me to Pharaoh and get me out of this prison” - Genesis 40:14

Have you ever experienced feeling forgotten by someone who promised to keep in contact with you, or said they would recommend you for an opportunity, but then seemed to have disappeared and forgotten all about you?

Scripture tells us about the extraordinary life of Joseph, a man who understood what it meant to be forgotten by others. Sold into slavery by jealous brothers who truly did want to forget all about him, their actions led to Joseph’s imprisonment.

While serving time with fellow inmates, Joseph interpreted a dream for the chief cupbearer who was also imprisoned at the time. Joseph asked to be remembered by him when he was released. But, following a quick release, this inmate forgot all about Joseph’s assistance. Genesis 40:23 explains, “The chief cupbearer, however, did not remember Joseph; he forgot him.”

So, was the cupbearer just a terrible person who purposely forgot Joseph? Was he a self-absorbed individual totally ungrateful for his help? Or, was his delay in remembering Joseph all in God’s timing? It’s a question we too may want to consider when it seems like we’ve been forgotten by someone we thought for sure would remember us. 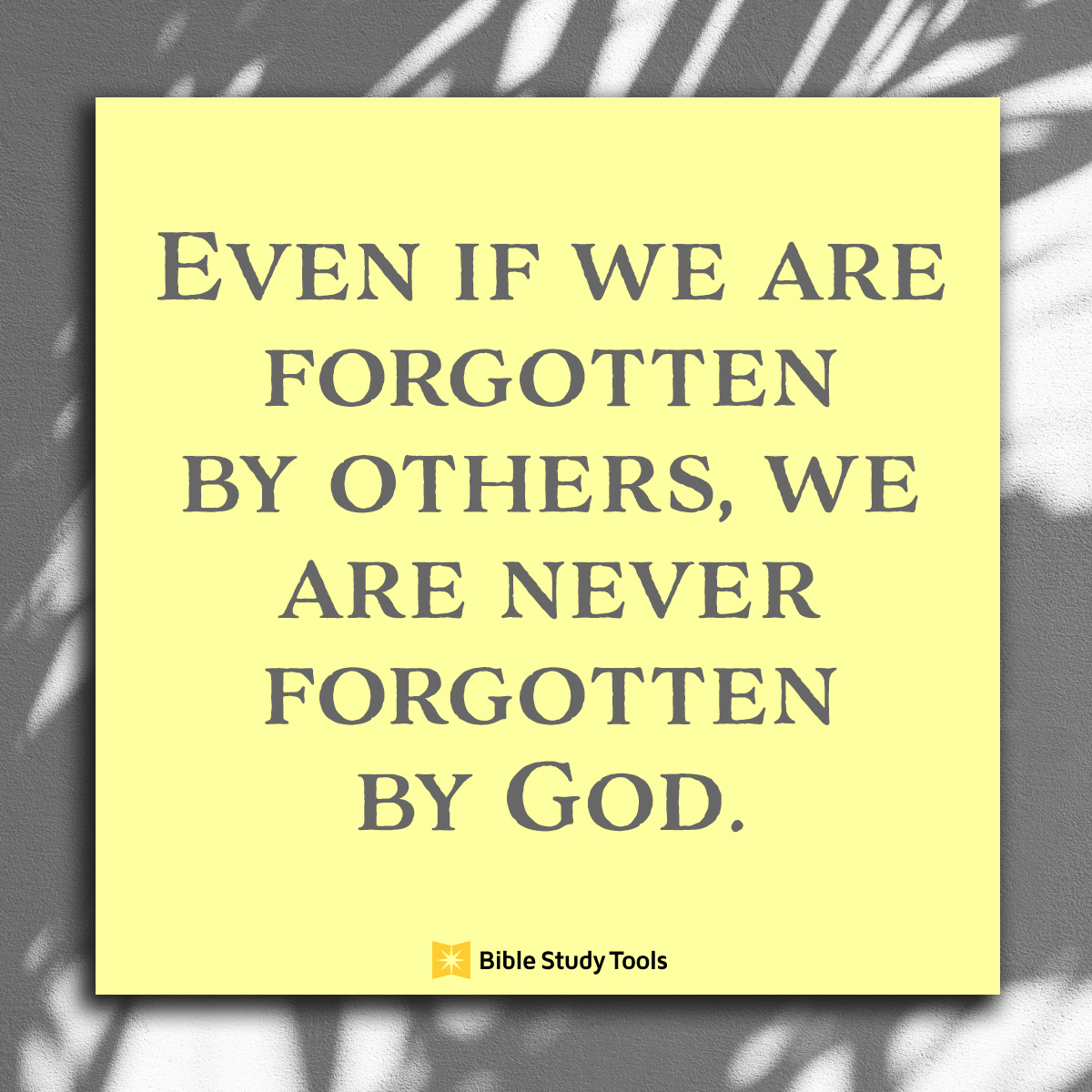 Genesis 41:1-13, describes what followed. After two full years had passed, the chief cupbearer’s boss, the Pharaoh, had a dream that he didn’t understand. When all his advisors and consultants couldn’t interpret the troubling dream for him, the chief cupbearer had an “aha” moment where he remembered Joseph.

This “aha” moment led to Joseph being called before Pharaoh to interpret his dream, an act that led to his release from prison and being placed into a high position within the kingdom (Genesis 41:41).

Although forgotten throughout his life by others, God didn’t ever forget Joseph, working through his life in remarkable ways (Acts 7:9-10).

Like Joseph, when we have felt forgotten by others, we can take comfort in knowing God remembers us. We can also trust God is at work in our lives, whether by way of those we are hoping will think of us, or through those who may surprise us.

I have a family member who was praying and asking God for a job, when friends who were thousands of miles away, ones he hadn’t been in contact with for years, “just happened” to be looking through a box that brought him to mind.

In thinking of him, they had an “aha” moment, where they felt prompted to contact him in consideration for an upcoming opening at their organization. In calling to reconnect with him, they discovered he was looking for a job, which led to his being hired for the position.

So, whenever we’re feeling forgotten by others, we can choose to trust God hasn’t forgotten us. We can believe He has a plan for our lives and will bring us to the minds of those who know us, in His perfect timing and according to His will.

Who has God brought to your mind recently? Anyone you haven’t thought about in years? Take time to consider why you’re thinking of them, and ask God if He is prompting you to reach out to them.

Lynette Kittle is married with four daughters. She enjoys writing about faith, marriage, parenting, relationships, and life. Her writing has been published by Focus on the Family, Decision, Today’s Christian Woman, iBelieve.com, kirkcameron.com, Ungrind.org, Startmarriageright.com, growthtrac.com, and more. She has an M.A. in Communication from Regent University and serves as an associate producer for Soul Check TV.

Want more Your Daily Bible Verse? We also have a podcast! This podcast features different verses than the written devotional you just read, but carries the same commitment to a closer look at Scripture each day. You can find out more by clicking the link below!